Shark Fishing Cocoa Beach wouldn’t exist without the hard work and dedication of our Captains.  Read their story and learn about their individual journey that has lead each of them to help others experience the fishing trip of a lifetime on Florida’s Space Coast. 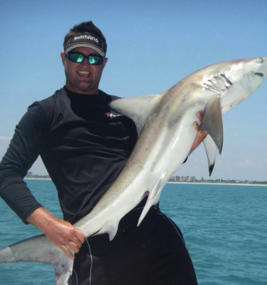 Captain Tyler Vollmer was born in Denison, Texas, where he was raised on freshwater fishing for largemouth bass. At the age of 12 his family decided to leave for better times in Florida’s Space Coast. The day Tyler arrived, his father and uncle took him fishing in the Indian River. Ever since then, it’s been in his blood. But it wasn’t until his senior year when he had a major decision to make. He never liked the idea of sitting behind a desk all day and wondering “what if”, so when he graduated he made his decision to become a full time fishing guide. shark fishing cocoa beach port canaveral, fl. sebastian inlet charter boats Captain Tyler now spends as much time as possible on the water in order to create a better experience for you. He is well respected by many other local captains because of his willingness to share his knowledge and information whenever it is needed. When not on the water you can find Tyler landscaping or jogging. Step aboard with Captain Tyler Vollmer and you can find yourself catching the fish of your dreams! In an industry dominated by older guides, Capt. Tyler is the next generation of young, energetic and knowledgeable fishing guide serving the Central Florida area. In several short years, he has quickly earned a reputation as an established, and well-respected member of the Central Florida fishing guide community. He brings a work ethic, knowledge of local waters, and easygoing nature that’s sure to make your trip enjoyable. Captain Tyler has shown dedication and drive that we have to keeping the rods bent. Love you Tyler! 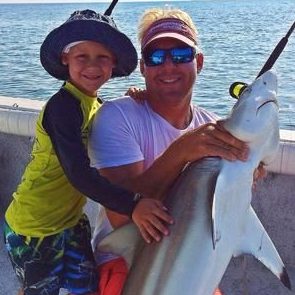 Hello, my name is Captain Chris Cameron the proud owner & operator of Fired Up Fishing Charters out of Port Canaveral in Cocoa Beach, Florida. Most people interested in booking a Deep Sea Fishing or Shark Fishing Cocoa Beach trip want to get a good overview of the captains, the vessels they will be on, recent fishing catches and a little bit about the business. Here is a little bio about myself & how my fishing adventures begun. I was born in June 1976 in a small town on the south shore of Long Island called Seaford, New York. Some of the best memories I had growing up was fishing with my father & grandfather and them teaching me the ropes along the way. Rain or shine, day or night and even at times in the snow you could always find me… fishing. If my parents were looking for me they always knew where they could find me on my homemade platform attached to one of the bridges on the waterway leading out to the Atlantic with a fishing pole in hand. I had a great mom that would even bring me a cup of hot chocolate to stay warm on those colder nights in New York. One of my first jobs while I was still in school was at the local bait shop. This was a great job for me since I needed to earn some extra money & what better way than to do something I had a passion for which was fishing!! I was able to connect with the local fishermen in town and get the inside scoop on where to find the fish that were biting, what they were using to catch the fish and I would share with them some of my honey holes fishing spots as well. I learned so much about fishing, tackle, various baits/lures to use for different types of fish, all sorts of fishing knots, terminology and knowledge that I still use to this day. After graduating high school I thought to myself, Hmmm what next… What would I want to do with my life? It was not too hard of a decision for me because I’ve had such a deep passion for my country since I was young. It quickly became a no-brainer… I would join the United States Navy so I could give back and serve like so many others before me. I got to do something so rewarding while being around the water all at the same time it really was a win-win for me. I was an 18 year old kid eager to grow up and evolve into a respectable man and was ready for whatever was put in my path. I ended up being in the Navy for eight years I enjoyed it so much I trained as an Aviation Mechanic and was assigned to various ships and aircraft carriers while fulfilling my dreams of being able to travel all over the world. I was able to fish when we were at different ports or while away on leave. After I fulfilled my 8 years in the Navy I moved to Orlando, Florida where I began fishing the waters of along the East Coast mostly in the Port Canaveral & Cocoa Beach area. My goal since I was young was to be a professional fishermen and I once I set my mind to something nothing can stop me. I started out as a mate on one of the top offshore fishing boats in Cape Canaveral and did that for a few years and gained a wealth of knowledge which helped prepare me for my Coast Guard Captain’s license which I’ve had for the last 8 years. In between being on the water I decided to become a full time Firefighter/Paramedic with a local Fire Department a career I love and find so rewarding by helping others not to mention it’s a great schedule working 24 hours on shift & 48 hours off which gives me plenty of time for fishing. I formed Fired Up Fishing Charters in 2007 and over the last 9 years we’ve managed to grow considerably each year by having so many repeat charter guests by gaining their trust and respect by showing them exceptional customer service while putting them on fish to create an overall Epic Fishing Experience. I feel blessed to have a winning team stand behind me with some of the most awesome friendly, knowledgably fishing captains you could ask for. (Check out my other captain’s bios for more information). In June 2009 my son Cash was born and he is the ultimate love of my life and raising him has been the most rewarding job ever. He enjoys fishing too just as I did when I was a kid and I love being able to teach him the ropes at an early age just like my father did for me. This sums me up in a nutshell …. I’ve truly been blessed with a great life, a wonderful family and doing the things I love most in life. I look forward to being able to have you as Fired Up Charter customer and building a relationship and as I do with so many of my other charter guests. 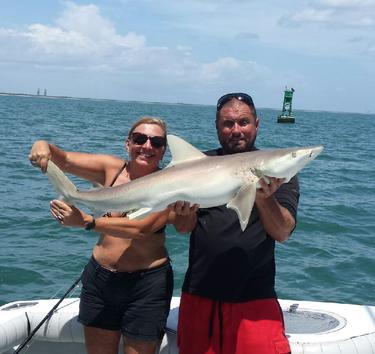 Captain Joe Byrd was born in 1978 in the city of Orlando, Florida. He was raised as a child aboard his dad’s fleet of commercial fishing boats targeting swordfish, tuna, tilefish, grouper and other various species. Joe has spent his whole life fishing the waters out of Port Canaveral long before the Port became what it is today and was strictly a commercial/recreational fishing port Canaveral. Behind the scenes Captain Joe is a fun-loving father and husband. His love for the waters has spread throughout his friends and family where even in his time off you will find him there teaching others, fishing with friends, or boating with the family. Captain Joe has earned the respect of many other Captains and fishermen in the industry over the years and is a great part our team here at Fired Up. Whether just taking the family out for a fun day on the water or a seasoned group of experienced anglers looking to load the fish box, Captain Joe enters every trip with the same enthusiasm enjoying every moment and most importantly having a SAFE and ENJOYABLE trip!!! Welcome yourself aboard today with Captain Joe for your fishing experience of a lifetime!